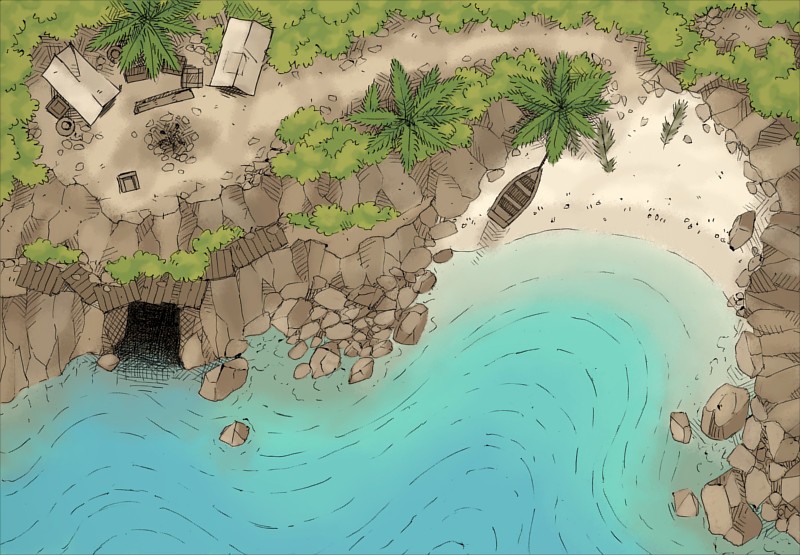 Here we have the master list of our combined 10 Island Encounters and 10 More Island Encounters. Below you will find the titles of all 20 encounters, for simpler navigation or use at the table. Clicking each one will take you straight to their detailed writeup in the respective article.

Land ho, sailors! What secrets lay beyond the beaches?

1 A tiny island sits in the ocean, decorated with only a trapdoor. Beneath the trapdoor is a network of tunnels and chambers, far larger than should be possible.

2 Rocks and sand have formed an island on the back of an enormous creature. It is peaceful but is drifting closer toward a settlement that is known for poachers.

3 An island of solid ice and stone sits in the ocean, housing an ancient ice temple. It houses an artifact that created the island to protect itself.

4 A guild of affluent mages has enchanted an island to strip visitors of their resources and gear, which is teleported to a vault. The mages watch on, observing how adventurers react and survive.

5 The party finds themselves repeatedly coming across the same island, despite no issue with navigation. They do not realize that the island is following them.

6 Soldiers have been ambushed on a nearby beach, and are being cornered on shore. The party is nearby and may be their only hope.

7 The island volcano some miles off the coast has been dormant for centuries, but now stirs with tremors. An eruption threatens nearby settlements and a secret within could spell disaster for many more.

8 Pirates have constructed their hideout in an island cove. The party sails nearby, and catch sight of a rowboat taking prisoners into the cave.

9 Long ago, a necromantic ritual went horribly wrong. The island it was cast on has become cursed with death, which now spreads into the ocean around it.

10 An arrogant explorer has shipwrecked on an island he believes holds a forgotten temple. He calls for help from the shore but seems much more interested in hiring the party to help.

11 Pirate and merchant crews have banded together over time, forming a floating trade post of connected ships. The ocean market is home to some of the most unsavory individuals but sells the most lucrative items.

12 A man is thrown from a cliff edge as a sacrifice. He survives the impact with the surface and calls to the party for help.

13 A trafficking ship full of dangerous and exotic beasts was shipwrecked on shore in a storm. The ship was destroyed and released all manner of beasts into the area.

14 The skull of an old and powerful beast rests inland from an island town. Its will is restless and is slowly gaining control of the townsfolk.

15 A group of faeries controls an island, luring unwary travelers. The illusion of a town draws the party in and illusions serve to divide and deceive them.

16 Explorers speak of an ancient ruin on a strange, drifting island. Those that have seen it have not returned, as the ruin is actually the mouth of a great beast.

17 The island’s shore holds a cliffside altar, activating to open a portal. The party must venture within, but what lies on the other side?

18 A colony of goblins has made an island their home. They are unaccustomed to visitors and treat the party as prophesied heroes. But they also have a tendency to sacrifice their ‘heroes’.

19 Sahuagin have encircled an island, forming a blockade. The people of the island can defend from attacks but rely on trade for resources. They won’t last much longer.

20 Few know of the hidden arena, sequestered on a secluded island. Fighters travel from all corners to compete and prove themselves.

Looking for maps and tokens?

2-Minute Table Top has hundreds of maps, tiles, and tokens. You’re sure to find whatever you might need to run our encounters or your own. They can all be found in our gallery here:

Troy McConnellPart-time DM and author of 2-Minute Tabletop's encounters, map lore, and characters. Basically, I write about all the campaign ideas that I don't have time to run. All with the assistance of my feline familiar, Wink. You can support my writing efforts on Patreon.
Posted in:
Articles, Troy McConnell
Tagged:
chart, encounter, island, list, ocean
Leave a Reply Cancel reply