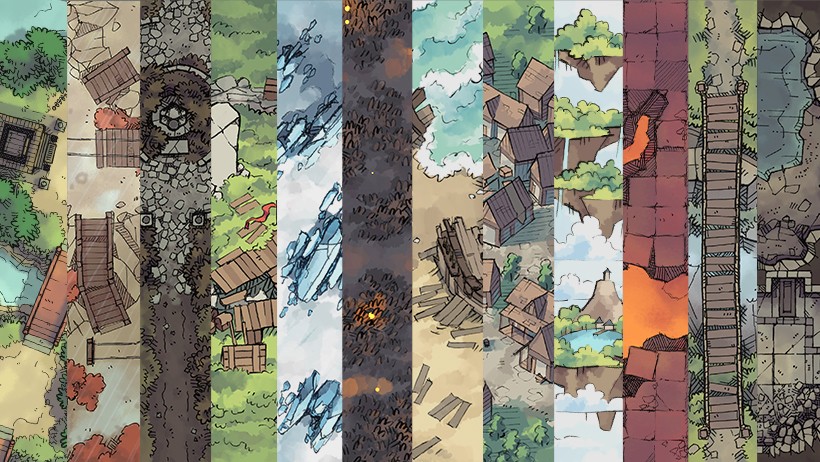 I have been a world builder for as long as I can remember. I wrote stories as a kid, dreamt of creating monstrously huge video games alone as a teenager, and always, always drew. Nothing much came of it though, as none of these things quite clicked with me.

There is not much of a role-playing presence in my corner of Australia, but fate introduced me to the game during a trip to Canada in 2013. All of a sudden I had a way to bring these worlds to life with the skills I had, and overnight I became a fledgling game master and map artist.

As a nineteen-year-old backpacker, I had budget (and nutritionary sense) enough only for 2-Minute noodles, sausages, eggs, and carrots. So, when I discovered RPGs, I didn’t instantly invest in Dungeons & Dragons. There was the promise back then of “D&D Next” and one could wait. And, more importantly, I barely had money for food, and absolutely no backpack-space for books.

No, I would focus on learning Pathfinder first! I procured a book of grid paper and, using miscellaneous knick-knacks as tokens, ran little danger room encounters with myself. Sometimes I would employ my enthusiastic travel buddy as a player character. It was my first, humble effort as a map artist!

Even before flying home to Australia a group had been organized with old friends, some of whom took convincing but all of whom were game enough to give it a shot. I began the framework for my very first campaign during that road trip. A very, very loose framework consisting of a single town and its surroundings. The first game took place shortly after returning to Australia.

I’m more than a little ashamed to say it, but that game consisted of the party meeting in a tavern and being employed by the barkeep to clear his basement of rats. Yeah, as cliche as can be! Luckily, none of my players knew better.

This campaign went for a few weeks but dissolved as schedules began to shift and conflict. Still, we had two players able to continue, and I persuaded my brother to also join in. Three would do the trick! But – finally realizing how stock-standard my setting was – I began from scratch.

The Lands of Wei

East-Asian mythology would be the inspiration for this new campaign setting. It would revolve around a spiderweb of allegiances between human clans, dragons, and mountain-dwelling oni. I didn’t know a thing about East Asia at the time, but it seemed an easy and interesting way to give the campaign a unique flavor!

So, in early 2014, we began our first game in the Lands of Wei. I knew nothing of Legends of the Five Rings and other pre-written settings, so I chalked it all in myself. I’m sure that I will write more about it in the future as, though players have cycled in and out, and player characters even more so, we still explore Wei to this day. It even survived our transition from Pathfinder to D&D 5e.

The other significance to come from this campaign is all of 2-Minute Table Top. It was for this game that I really started to resemble a map artist, drawing world maps, battle maps, and buildings. I had been drawing since my childhood and also studied graphic- and fine-art for two years after high school, so it was the natural way for me to bring my world to life.

Taking to the internet

A few months into our adventures the player characters gained possession of a small boat. Having drawn it in Gimp and witnessed how easy it was to print, I thought to share it on r/DnD. It quickly attracted some encouraging feedback! I decided to keep on sharing my maps and, needing a place to host them anyway, I hosted them on Gumroad, a pay-what-you-want storefront.

Gumroad did well enough and the Reddit comments were urging me on. After a few months, the natural progression was for me to stake out some virtual space and start a website.

I knew that my aim was to make cheap RPG maps and resources that were quick and easy to use – just the things I made for myself every week. In the course of chatting with my brother, he devised the name “2-Minute Table Top.” It hearkened back to my RPG roots in Canada, and also reflected things cheap and easy, and so I went with it. 2-Minute Table Top was born.

At this point in my career, I was drawing a mixture of Japanese-inspired maps for my personal campaign, as well as maps inspired by my travels, video games, and movies. Even now this is my creative model! I began to work on the goal of creating a comprehensive collection of maps and took on a good number of commissions. I was working a job during the night, and drawing in the day, with the dream of going full time.

Patreon was definitely not as omnipresent then as it is now. Originally, I jumped on there because I saw that it was working out well for Dyson. Back then I was asking a dollar for each map, and it was only a while into my Patreon campaign that that changed.

Since then, Patreon has been steadily growing and growing. Our first significant milestone was that I would start posting my maps for free, and that has been my model since. The maps are completely Patreon-funded, and the generous supporters gain exclusive variants, coupons, and PSD files in return.

A few years in, I crunched the numbers, quit my night job, and began drawing full time.

Since leaving school I had very little direction. My goals would waft between web design, graphic art, and landscape architecture, but now I had – by divine intervention, it seems – found that being a map artist involved all of those interests.

In the years since I have been using the maps to hone my skills and keep on expanding that library. I like to think that the map quality has surged in proportion to my increased time, but I still have a long way to go!

I’m immensely grateful to my Patrons for helping me do this full time. Day to day I am either collecting inspiration from the world around me or working on something creative and fantastical. The only difficulty is in trying to explain it all to a hairdresser or accountant, but that is a small price to pay for working my dream job!

At the time of writing I have drawn 184 items. You can browse them all here.

Advice for the aspiring map artist

What do I tell people who ask me for advice?

Don’t set out to make a living, but treat this as an artistic hobby or supplement to your campaign.

Develop a habit and enjoyment in studying perspective, textures, and everything-drawing. Do this daily! Buy a small art journal and fill a page every day, and then draw one “real” piece per week. You can probably do this around your job, such as when watching TV. I usually do it while listening to audio books.

This is where I would put my Audible sponsored link, if I had one.

At the very least this will enrich your mind and your campaign. If you’re anything like me, it will also enhance your appreciation for nature and art. Studying art opens your eyes to beauty and design like nothing else.

So, rather than fueling your motivation with the thought of achieving a goal, create a daily process that you enjoy. Success is basically guaranteed if you can manage that, as you won’t be battling against laziness if you are doing something you enjoy. Don’t make it a daily task, nor hinge your enjoyment on the hope of making a living, but on enjoying the day-to-day process whilst still challenging yourself.

A small daily task, if it really daily, will beat the of a spasmodic Hercules.

Ross McConnellArtist and DM, I draw the maps, record the videos, and write the articles here at 2-Minute Table Top. It's my ideal creative outlet, and it's all thanks to you!
Posted in:
Articles
Leave a Reply Cancel reply