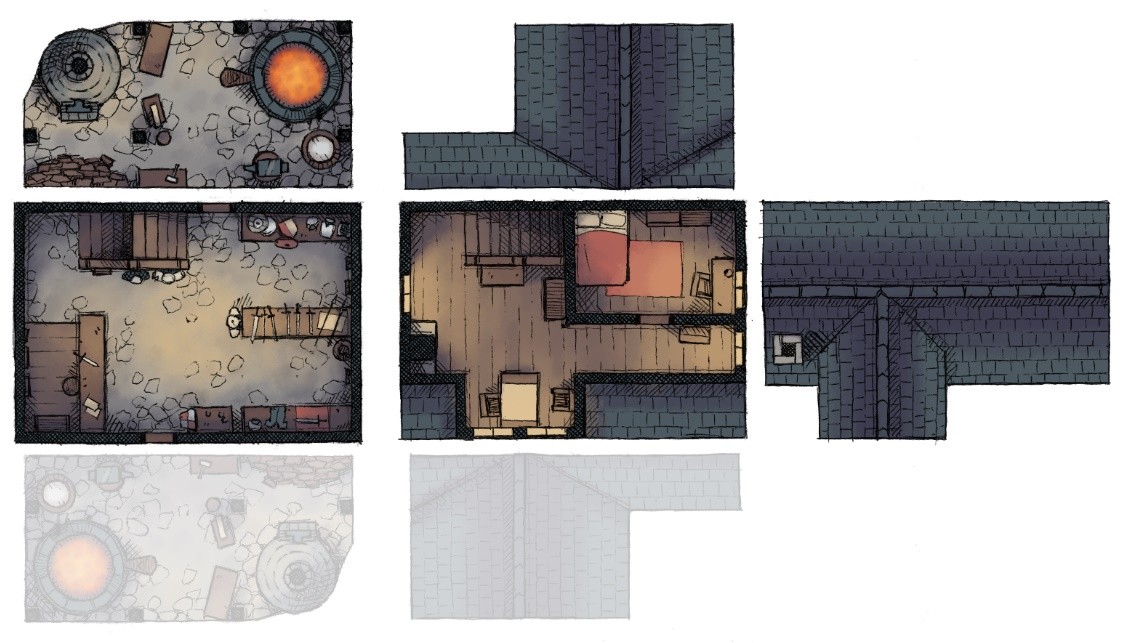 Today’s battle map is The Blacksmith, a modular two-story building with an exterior workspace, interior shop, living area, and roofing. There’s even space for a basement!

The door’s slam shocked the pair into silence. Pressed against the wood, panting, was Erick Gildensson. His loose-fitting linen shirt was marked with sweat.
“They know. The Inquisitors are on their way now.”
Yorick and Father Qalurn rushed back to action as Erick leaned against a nearby table to steady himself.
“Should be the last soak before it’s done. Are you ready, priest?” Yorick’s eyes were panicked in the light of the furnace. His thick, gloved hand wiped beads of sizzling moisture from his brow before gripping back to the tongs. The news had quickened his breathing, his teeth grinding against orcish tusks. Father Qalurn, an elf well into his final century, was kneeling over the oil barrel. He responded with only a raised hand, remaining focused on his chant. Deep in the liquid, a small light shone to life.
Erick moved back through the building and to the front door, pushing the deep brown hair from his eyes. He stopped for just a moment to catch his breath before looking out. Bracing against the frame, he pulled the door no more than an inch. A strained creaking filled the empty room.
The streets were quiet, as they had been for some time. Those few that had been out had likely seen Erick’s retreat. It had sent everyone to their respective bastions, shutting doors and windows behind them.
The street was quiet, but it was not empty. A detachment of Inquisition soldiers, clad in their shining metal and crimson tabards, was marching toward the blacksmith.
Erick’s gaze flicked between the soldiers and his allies outside. Purposeful footsteps were contrasted by frantic hammering and recital. Beneath Qalurn’s outstretched hands, a golden shimmer danced in the oil.
“It is done, Yorick.”
Erick looked back through the opening. The soldiers were only moments from turning onto the property and finding them. They wouldn’t take the time to knock. He had to delay them.
Orders were barked as they approached and caught Erick’s gaze.
“Mister Gildensson, open the door. The Inquisition has received word of your actions and requires you and your associates for questioning.” Their leader’s voice boomed with the rage of a beast waiting to be free of its leash. Erick stumbled back across the room, his mind scrambling as an armored boot sent the door flying open.
“On behalf of the Inquisition, I demand you all cease your current activity. You will be coming with us!” Erick found himself at the doorway leading to the forge, his hands catching against the frame. He couldn’t talk them down but he could block them, even for just a second. He had to. Behind him, Yorick plunged the red-hot sword into the oil barrel. The eruption of the steam was punctuated by a deep, melodic humming. The soldier’s mouths opened with unspoken questions below their metal visors. Slowly, they edged forward.
“Erick, here!”
The weapon sailed through the air from Yorick’s glove to Erick’s hand. He reacted in time to catch it, grasping firmly around the hilt and turning back to the imposing infantry. The longsword was sharp but crude in its design. Its blade, curved guard, and flared pommel were all of one piece of metal, still glowing with the forge’s fire. Yet it did not burn him.
The heat felt as if it connected with Erick’s racing blood. Something reached out from the metal, binding with his heart and mind. In his hand, the weapon shifted and warped. Grooves twisted around the handle, morphing its form into something more intricate and ornate. The material itself smoothened and cleaned as if polished for display. As the wave of transformative magic reached the blade, the remaining length cracked and broke. Shards of metal clanged to the ground.
Erick could hear unsure gasps from over his shoulder. In front of him, the exposed mouths had twisted into snarling fury. He lowered the weapon to his side, embracing the power that warmed his grasp. The soldiers each drew their own.
He looked up to them. His face had settled and he stood strong and upright. In his hand, the sword ignited with a blade of pure, burning radiance.

Here is a quick demonstration on Roll20, showing the different layers in action:

This is the first set piece in my new series, which will be a collection of modular buildings with several compatible roof, basement, interior, and exterior options, meaning you can construct a huge number of unique buildings from just a few pieces!

You can look forward to seeing an alchemist, general goods store, and plenty of housing options in the weeks to come.

The Blacksmith battle map is available for just a dollar.

For exclusive map variants and even the PSD files, consider joining the amazing community that makes these maps possible:

Ross McConnellArtist and DM, I draw the maps, record the videos, and write the articles here at 2-Minute Table Top. It's my ideal creative outlet, and it's all thanks to you!
Posted in:
Blog, Set Piece, Troy McConnell
Tagged:
battle map, blog, guide
Leave a Reply Cancel reply