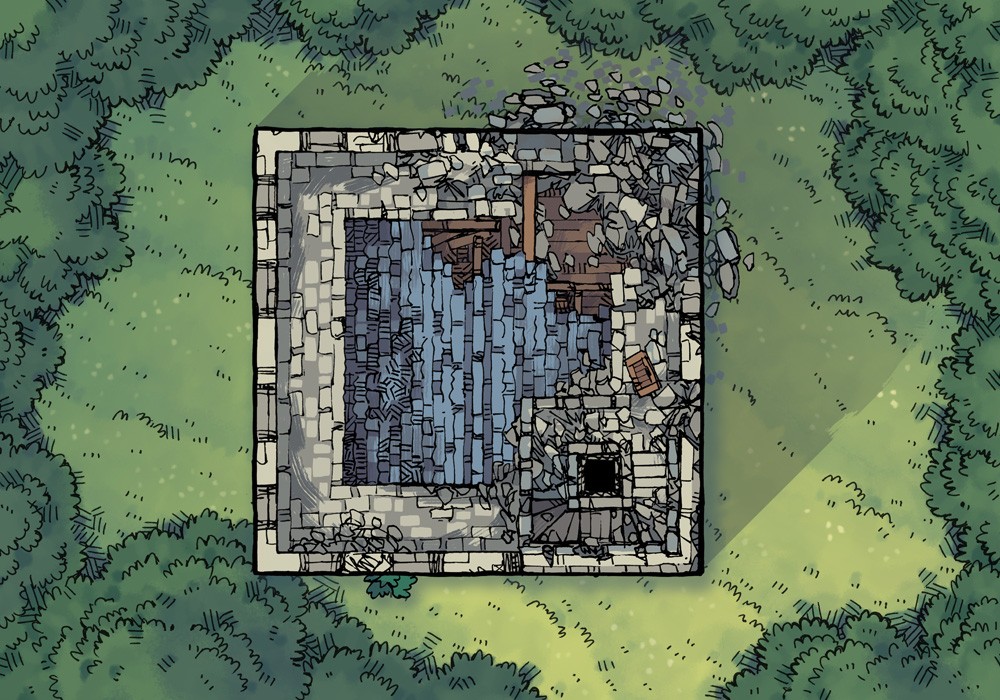 A lifetime ago this fortress has been bombarded, shattering the tower’s top and crumbling the north-eastern corner. The rubble lays strewn inside and out, and nature has begun creeping in…

Pyotr stepped out from the line of trees, dried and dead grass crunching under his boots. The wide brim of his hat turned upwards and crimson eyes peered from beneath it. Beyond the soles of his shoes, he felt the faintest shifting. Brushing his coat back, he drew his rapier, its polished metal gleaming in the last light of dusk.
The earth of the clearing cracked and split in reaction to the intruder. Thin fissures fell away to release withered, skeletal hands. They gripped at whatever handfuls of dirt they could to hoist themselves free, screeching in raspy discordance as their eyes met the drow’s. A hulking fist breached between them and the tower. The grotesque form that emerged was an amalgamation of flesh and earth. Roots bound together bone and muscle, suffused with necromantic energies.
“Is that all?”
A storm gathered in the twilight clouds above and wind blew into the grove, gathering at Pyotr’s feet. He flicked his blade to the side as his other hand found his component pouch. Static charged the air and a crowd of guttural roars sent nearby birds scattering.
For all the legends and stories, Pyotr found his opponents underwhelming. These monsters, the very same that filled campfires and fairy tales, were little more than fodder before him. Each precise thrust of his blade sent another clattering to the ground, its ancient armor breaking against the force. After everything he had been told of this place and the evils that befell it, this was… disappointing.
Despite the unfortunate state of his combatants, their numbers would surely prove tiresome. Pyotr, as his sword skewered another risen soldier and sent a bolt of lightning cascading through several more, was growing frustrated. It was time to end this.
Sliding his sword free and cleaning it with a blinding flourish, he brought it to his mouth. His arcane words infused it with magic that crackled and thrummed. Lunging the rapier upwards, a single arc of electricity shot into the clouds. The air grew calm and the last remaining sunlight was swallowed in shadowy grey.
Three more swordsmen rushed him, rusted weapons flailing violently as they lumbered. They were not some ten feet from the mage when the storm responded. Vicious, focused columns of lightning rained down at Pyotr’s call, reducing the attackers to scraps and smoke. More followed, each one being vaporized without even a chance to strike. One left.
Pyotr’s pace quickened. He broke into a sprint towards the golem, which raised its arms to slam down and crush the smaller man. As the colossal fists descended, a torrent of wind lifted Pyotr upwards, past its reach. He vaulted off the gnarled face of the giant, spinning in the air as his sword charged once again. A simple spell, but quite potent if given enough power. Bolts and sparks collected in an orb on the rapier’s tip, releasing into the golem’s nape with faultless precision.
As Pyotr’s feet touched down weightlessly on the tower roof, the stories of his childhood were confirmed. The atmosphere bent and ripped, dropping a robed drow onto the hard stone. He appeared younger than Pyotr, but his eyes and struggled tone suggested something much greater.
“By the gods, how long has it been? Are you… You must be Jeros’s descendant?” The man’s gaze searched erratically, taking in the damage and overgrowth of the old tower. His limbs fought to support him and a bundle of rags dropped out of his exhausted arms.
“Please. It’s been so long, but we need to protect it. Jeros knew you would come so that we could sto-” The confusion in his eyes shifted from his environment and down to his chest. He followed the rapier blade that protruded from it, up Pyotr’s arm and landing on his blank expression. Whatever sorrowful question might have come next was cut off by the sword being removed.
As the man collapsed backward, Pyotr cleaned his weapon once again. At his feet, he could see the hand’s leathery skin and hear its whispers. He twisted the rapier in his hand, reversing its grip and preparing the blade against his own left wrist.
“All things require sacrifice,” he muttered, charging the blade and drawing it upwards.

If you have picked up MCDM’s Strongholds and Followers, this might be a worthy keep for you player characters to claim and refurbish. Failing that, the abandoned floors are an excellent lair for a reclusive creature or monstrosity, such as a griffon or were-beast. Imagine the heroes creeping room to room in search of something plaguing the nearby common folk…

Please share your encounter ideas in the comments! What creatures might live here? What other purposes might you use this keep for? I want to hear it all.

Download the asset pack below, and consider some of our similar items:

For exclusive map variants and even the PSD files, consider joining the amazing community that makes these maps possible:

The Ruined Keep is free to download thanks to Patrons such as:

This work is licensed under a Creative Commons Attribution-NonCommercial 4.0 International License, thanks to our generous supporters. If you would like to use this map commercially, please contact me 🙂

Ross McConnellArtist and DM, I draw the maps, record the videos, and write the articles here at 2-Minute Table Top. It's my ideal creative outlet, and it's all thanks to you!
Posted in:
Blog, Set Piece, Troy McConnell
Tagged:
building, castle, fortress, keep, ruin, stronghold, tower